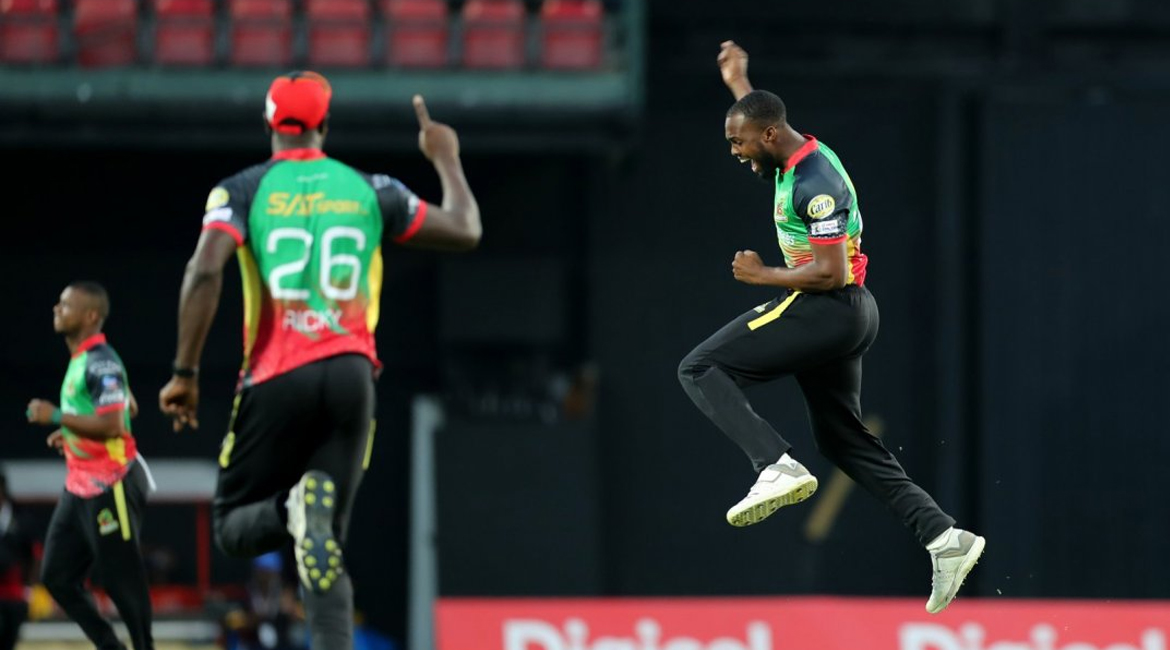 Jordan’s are the second-best figures ever for a Hero CPL debutant, and the best since the very first year of the tournament.

He took a wicket in each of his four overs as the Zouks were restricted to 138/9 from their 20 overs, a total the Patriots chased down with minimal fuss thanks largely to Evin Lewis’ ferocious 65 from 30 balls.

The Patriots recovered quickly from the early loss of Devon Thomas for just a single, with Lewis and Laurie Evans adding 45 for the second wicket either side of a short rain delay.

Evans was bowled by a beauty from Fawad Ahmed that spun past the edge into off stump, but Lewis was on a mission.

Having set the record for the fastest ever Hero CPL half-century earlier in the tournament he became just the second man to score 100 career Hero CPL sixes with the first of his six sixes here. Chris Gayle has 160.

Lewis dominated a 62-run stand with Mohammad Hafeez that finished the game as a contest, reaching his 50 in just 26 balls with his fifth six, hit high and handsome off Kavem Hodge.

That started a run of 20 runs in four balls before Hodge exacted a measure of revenge, Lewis finally miscuing one to be caught by Roland Cato on the boundary.

The Patriots were just 14 short of their target when another flurry of rain forced another short stoppage, but the home side’s celebrations were not delayed for long.

Mohammad Hafeez fell for a measured 26 with the finishing line in sight, but Carlos Brathwaite finished the job with a huge six – and with a whopping 31 balls to spare – to seal a victory that had looked on the cards ever since that dramatic first Hero CPL spell from Jordan reduced the Zouks to 33/3.

Jordan struck a key blow in the very first over of the night as Andre Fletcher slapped a short ball straight to Fabian Allen at point. In his next over he picked up an even bigger wicket as the in-form Rahkeem Cornwall sliced one down to third-man where Sheldon Cottrell took a smart catch.

Hodge got a couple of boundaries away in Jordan’s third over inside the Power Play but then picked out deep midwicket looking for a third.

Usama Mir got to work in the middle of the innings, dismissing Cato and Colin de Grandhomme while giving up just 13 runs in four expert overs of leg-spin.

De Grandhomme made 30, while Daren Sammy unleashed a couple of huge Hero Maximums in his 18.

But Sammy and Kesrick Williams fell to stunning diving catches in successive balls from keeper Thomas – Williams the fourth victim for Jordan – to leave the Zouks 100/8.

Hardus Viljoen and Obed McCoy added an enterprising 35 for the ninth wicket, but the damage had been done.

Victory for the Patriots lifts them to third in the Hero CPL table, behind only the unbeaten heavyweight pair of Guyana Amazon Warriors and Trinbago Knight Riders.