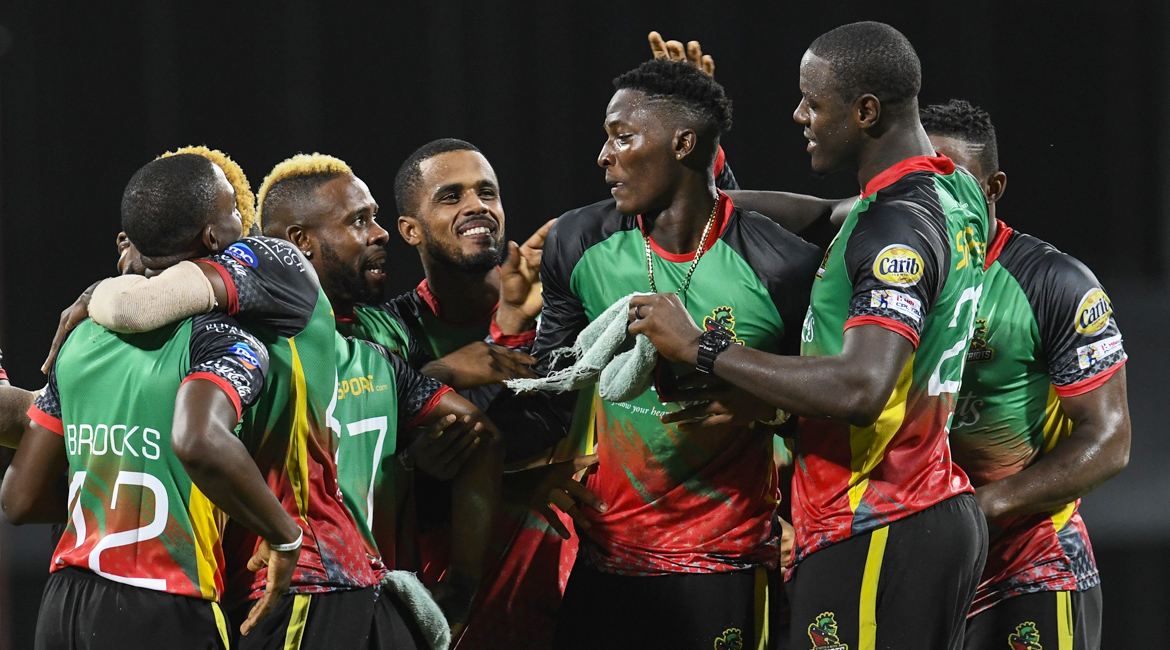 St Kitts & Nevis Patriots secured their 2019 Hero Caribbean Premier League (CPL) playoff spot in dramatic style as Dominic Drakes bowled Harry Gurney with the final ball of the night to seal a thrilling one-run victory over Barbados Tridents, who now face a winner-takes-all clash with St Lucia Zouks on Sunday after a dramatic batting collapse when victory appeared in their grasp.

Superb bowling from Carlos Brathwaite, Sheldon Cottrell and Rayad Emrit on the back of what would prove a crucial 33-ball 53 from Shamarh Brooks all helped set up the dramatic finale and ultimately what had looked for most of the night an unlikely victory. The two points move the Patriots up to second in the table for now but more importantly certain of at least fourth no matter what happens over the next few days.

Tonight’s result means Trinbago Knight Riders are also sure of a top-four finish despite their recent struggles, while the Tridents are condemned to what amounts to an eliminator before the Eliminator against the Zouks to determine the final top-four spot.

The Tridents will be kicking themselves for failing to chase down the Patriots’ 149/7 having appeared in full control for much of the game, first when keeping the runs down with the ball and then when easing to 85/2 in the run-chase.

Shakib Al Hasan was integral to both on his return to Tridents colours, opening the bowling with a maiden and ending with 1/14 from his four overs, before appearing set to guide his team to a routine victory.

But his dismissal for a 25-ball 38, caught at long-on off Brathwaite, triggered a collapse of 5/14 in under four overs to leave the chase in ruins. Yet the Tridents would roar back once again, Raymon Reifer blasting three sixes on his way to 34 in just 18 balls.

From needing 51 off 29 with three wickets in hand, Reifer’s assault reduced the equation to five runs in five balls with two wickets in hand before he was run out attempting a high-risk second run in a desperate bid to retain the strike.

Last pair Harry Gurney and Chemar Holder each picked up a single to leave the target at two to win from the final ball of the night. But Drakes went full and straight to beat Gurney and spark dramatic celebrations.

That collapse from 85/2 to 99/7 had proved decisive after all. After Shakib fell, Jonathan Carter chopped on to give Brathwaite a second wicket in the over, while Jason Holder struggled before miscuing Emrit to mid-off. Emrit had earlier had Alex Hales superbly caught by Sheldon Cottrell running back from short fine-leg in an impressive spell.

Ashley Nurse was then trapped plumb in front to give Cottrell a second wicket, having seen off opener Johnson Charles early in the run-chase, and Brathwaite got his third when Thursday night’s record-breaker JP Duminy edged behind for 18.

Shakib had earlier led the way in a fine all-round bowling display from the Tridents, in which he, Jason Holder and Gurney all went for under a run a ball while Hayden Walsh Jr added two more wickets to his impressive recent tally.

Although he had to wait until his final over to take his only wicket – Brathwaite trapped lbw – Shakib was the leading man.

His first over of the 2019 Hero CPL was also the first over of the innings. It was a maiden that set the tone for a powerplay that brought only 32 runs for the Patriots and the wicket of Mohammad Hafeez caught behind off Jason Holder.

Evin Lewis never really got going and was Walsh Jr’s first victim of the night as a slog-sweep picked out Jonathan Carter at deep midwicket.

That the Patriots got any kind of defendable score on the board at all was largely down to Brooks, who rewarded the decision to push him up the order to number three by blasting his way to a half-century from 30 balls in an innings where no other member of the top five reached a run a ball.

He was bowled by Walsh Jr’s final delivery of the night, though, and when Brathwaite followed in the next over it was left to Fabian Allen and Keron Cottoy to try and lift the total beyond 150.

They gave it a good go, but a superb closing over from Gurney that gave up just four runs before Allen was bowled off the last ball, meant the Patriots came up short of that landmark. But, by the barest of margins, 149 would prove sufficient.